by Bobby Rio
co-creator of: Magnetic Messaging: Turn Her On with Just 3 Texts 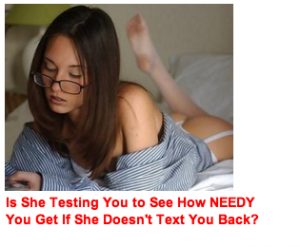 or the guy she’s in bed with?

Or have you spent months texting a girl only to realize you were her “text buddy” and NEVER going to meet up with her?

Here are five reasons the girls you like are ignoring your texts, too busy to hang out with you, or continually giving you the pathetic friend zone speech.

Mistake #1: Confessing Your Feelings Over Text

As guys when we have all these bottled-up feelings for a girl we want to blurt them out. We think: if only she knew how much I like her she’ll surely want to be my girlfriend. WRONG. The minute you confess your feelings to a girl you’re revealing your hand… and leaving her nothing to work for. Remember, the less she has to work for you… the more bored she becomes.

Do you know why girls are repulsed by “nice guys?” Because they try way too hard. And anytime a guy is trying too hard she immediately starts thinking, “Uh, Oh… there must be something wrong with him?”

Do you know the second reason girls are repulsed by “nice guys?” Because they send BORING texts. When a girl is continually pulling out her phone to read “Hope your day is going well” or “Enjoy your weekend” or “Have fun tonight” you begin to seriously annoy her. I call these “checking-in” texts and you want to avoid them because these texts make you appear way too “needy.”

Mistake #3: Being too Available

There are a few reasons this will kill her attraction towards you. First off, it eliminates some of your mystery. Second, it doesn’t give her time to miss you and anticipate hearing from you. And third, she places less value on guys that are too easy to catch. Which means if you’re always around she begins to value you less. This is why you need to “strategically retreat.”

Mistake #4: Texting Your Way into the Friend Zone

Here is where guys really blow it. They think the more they text back forth with a girl, the more she starts to like them. And they’re sort of right. She does start to like you more… as a friend. If you’ve ever gotten a girl’s number and then texts back and forth with her for months and yet she never seems to want to meet up. You’re her “text buddy.” Which is just as bad as being her “pen pal.” This is why its important to learn how to say more with less. (In fact, you can use these 3 texts to turn her on and get her out on a date)

Mistake #5: Giving Up too Soon

Do you want to know what the biggest mistakes guys make? Giving up too soon. Here’s a secret: Every girl is like a “lock”, and getting her turned on is just a matter of finding the right “key.” Most guys give up the minute a girl “tests” them.

In fact, my friend Rob has 3 simple texts he calls “The Key Lock Sequence” that he’s used to text his way out of the friend zone, re-ignite things with a girl that slipped away, and even get a girl who was sending one word responses to suddenly be eager to hook up with him.

I just finished recording this video showing you the three texts. 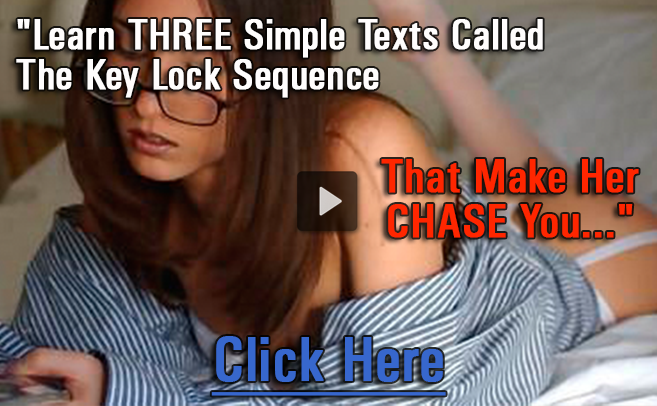 So now that you know the big mistakes you need to avoid its time formulate a solid game plan.

In this video you’re going to learn how to turn your phone into a magnet… by using a specific sequence of texts called: The Key Lock Sequence.